What is Social Value?

Social value is an attempt to quantify the value attributed to activities and interventions that contribute to communities, individuals, organisations. The source of it lies in the Public Service Act in 2012, which became known as the Social Value Act. Through public service procurement, HM Treasury saw a way where commissioners of public services could stipulate wider economic, social and environmental benefits to communities, thereby making a difference to the community, ‘levelling-up’, and not outsourcing all the opportunities.

Social Return on Investment (SROI) is a useful tool to quantify social value that is based on a traditional cost-benefit analysis and assigns a monetary value to social returns using financial proxies, which are compared against the level of investment to produce an SROI ratio of costs (expenditure) to social outcomes. We won’t go into measuring value, or what value is for this article. Instead, we will take the simple stated preference:

‘How much would you be willing to pay if this wasn’t there?’

To measure and evaluate social value, there are a number of quantitative and qualitative tools. The ones we favour are the Housing and Charitable Trust social value calculator (and recently mental health calculator), and the design guidance and process (qualitative) from UKGBC and RIBA Social Value Toolkit. Design principles that purposefully enhance social interaction and achieve positive psychological effects allow for long-term value. 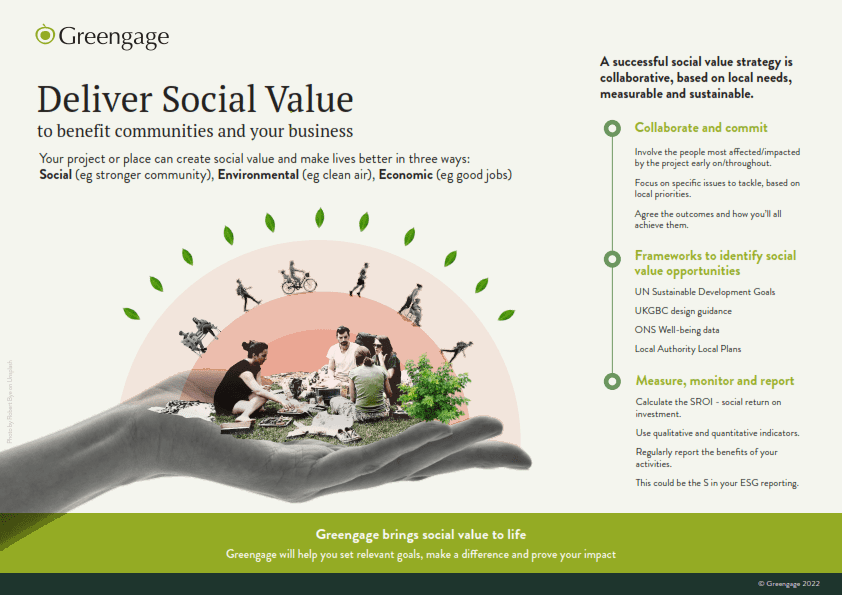 Where is it applied?

The built environment sector is an obvious contributor of social value because of the impact to existing residents and environment, and the opportunities available through planning, construction and operation. Examples of projects where this can be applied include regeneration sites, new residential developments, infrastructure such as railway stations, hospitals or community centres, and even organisations. Much like you measure your environmental footprint, organisations can measure their own social value via the community contributions they offer, be that through local apprenticeships / internships, community volunteering, inclusivity and diversity advocacy, and employee wellbeing.

If we were to take the five RIBA Stages (and Greengage’s approach to social value) you can see the activity at each stage and how it is being measured.

Click on the image to view the full RIBA presentation 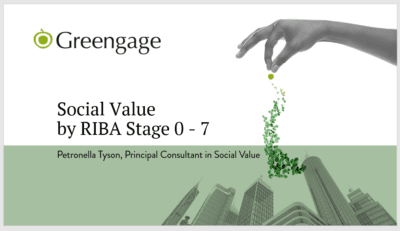 At Greengage, we extend the remit of social value to encompass all benefits to the community, including health and wellbeing benefits from the design, education, training and employment opportunities, investment in social infrastructure and green spaces, and the strength of the community. We like it because it enrols our partners in their potential as contributors (and not only disruptors) , holds their commitments to account and becomes part of their reporting framework, much like we’ve seen with the increase of environmental reporting over the past decade. How this fits with ESG reporting we will come to later on.

Where is it going: a whole community approach?

Some calculators attempt to quantify the qualitative aspects of social value, and perhaps the more eudemonic aspects of wellbeing (long-term wellbeing). Often, we get caught up measuring the short-term, more immediate aspects of wellbeing (hedonistic), such as happiness, as opposed to the longer-term aspects that stay with us for longer: fulfilling one’s potential, stability, growth and belonging. Flourishing refers to the experience of life going well. It is a combination of feeling good and functioning well.

The Quality of Life Foundation (a collaboration of developers, architects, landowners, consultants and academics) are piloting a framework they developed that considers a holistic approach: Control; Health; Nature; Wonder; Movement and Belonging. These aspects incorporate an inclusive approach considering wellbeing, and access to wellbeing. We are looking for projects to apply this framework to, so if this is of interest, please do get in touch.

To complete your Environmental, Social and Governance reports, social value fulfils on the ‘social S’ element to demonstrate your social impact and contribution. Establishing an in-house reporting framework that evaluates not only projects but also corporate matters of diversity and inclusion, training, employee wellbeing, local procurement and community support (e.g. volunteering). Governance (the ‘G’) considers the supply chain, fair wage, and company structure of the organisation too, which can also be quantified by social value tools.

Who is ultimately accountable for reporting the value long-term?

Another area for development is the fulfilment of social value long-term. Once a project is delivered, who has the responsibility ongoingly to hold partners and the community to account to ensure the social value commitments are continued and reported on long term? Usually, unless it is a housing association, local authority, student housing or build-to-rent, the developer and partners have left the community.

On a similar note, social value in communities can be fragmented, project-focused, and disconnected from what else is happening in the wider community. Each project team is responding to different needs captured at that time from the community or from their own capacities rather than a clear direction set by the community for what they want resourcing and support in, and thus achieving it coherently. We follow the local plan, and insights from community consultation, but this could be more joined up. Developers, planners, housing associations, councils could then refer to a community-led social value strategy rather than deciding it themselves.

What would a portal for all the outcomes/ recommendations from reports for each community look like, so we could coordinate our efforts better? By standing on what has happened before, we can deepen and add to the existing value, rather than starting something new or different. Take the Old Kent Road for example, under their action plan there are many redevelopment projects underway without a joined up social value strategy. Therefore, what’s missing is a record of the entire social value contributed since the action plan began.

This would then tie-in with better post occupancy evaluations and an ongoing sense of whom the responsible actor for the community’s social value might be: a local authority, parish council, regional authority, tied in with payments to that authority on the developers behalf for doing the work. This would form a coherent strategy and significant value over time to the community in the direction they choose.

See Flora Samuel’s work on ‘Mapping Eco Social Assets’ as well that drills in to the hidden value of a place, led by citizens of the community.

At Greengage, we would be happy to explore where social value would help your organisation and / or project. We also run CPD’s on the topic, so do book us in to bring your team up to speed!

Get in touch with Petronella to explore how to integrate social value into your projects and as an organisation.

What does ESG mean to your business?

Embodied carbon and cement replacement: what are the alternatives?