The Sun Finally Sets on BREEAM 2008

The Sun Finally Sets on BREEAM 2008 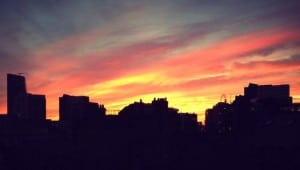 Despite the NDRFO scheme officially going live in October 2014, there has been a running in period where both the 2008 schemes and the 2014 scheme have been offered.

As of midnight on 16th February 2015 the BREEAM 2008 scheme will no longer take registrations and refurbishment developments will only* be able to register against the new BREEAM Non-Domestic Refurbishment & Fit-Out 2014 scheme (BREEAM NDRFO 2014).

So what has changed and what has stayed the same?

As with all BREEAM schemes, projects assessed under the scheme can receive a BREEAM rating from Pass

to Outstanding, however the certificate will only indicate the parts of the building that have been assessed.

This is in keeping with a the BREEAM New Construction 2014 scheme, but different to the 2008 methodology which required the use of a Green Lease Agreement or a Green Building Guild to capture the element of the development which were not part of the assessed scope of works.

Again in keeping with the BREEAM New Construction 2014 methodology, the NDRFO 2014 scheme is structured into 4 modules, referred to as Parts 1, 2, 3 and 4. 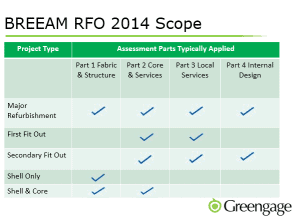 Part3- Where there are improvements made to the local services. Local services are defined as services that supply a specific area and may connect into the distribution systems from the core services within the tenanted area. Such as; Replacement light fittings, systems & controls, upgrade of zone controls, Local ventilation, Local heating/cooling units etc.

Part4- Changes to the layout and/or redecoration of the refurbishment/fit-out area. Such as; Remodelling of interior spaces e.g. installation of internal partitions. Changes to wall, floor, ceiling coverings, sanitary fitting e.g. tea/coffee points, kitchenette. Part 4 is broadly in line with a Category B fit-out. 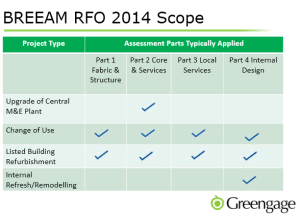 BREEAM 2008 schemes could be used to assess New Construction, Major Refurb, and Fit out; as an assessment tool they were not specifically designed to capture the challenges and rewards associated with a refurbished development.

The new BREEAM Refurbishment and Fit-out 2014 scheme is more suitable than 2008, as for the first time provides a dedicated version of BREEAM for the assessment of non-domestic building refurbishment and fit-out projects.

Finally as the BREEAM New Construction and Non-Domestic Refurbishment & Fit-Out 2014 schemes are design to both align and complement each other the ongoing assessment and re-assessment of building stock is now simplified and comparative, thus providing clients with reassurance that there is a consistent approach from one project to the next, allowing comparability across the property market.

*Licensed assessors will still be able to register projects under 2008 and 2014 after this date where there is a contractual planning or funding requirement to achieve a rating under that version of BREEAM).