People and Place- The Importance of Outdoor Space

People and Place- The Importance of Outdoor Space 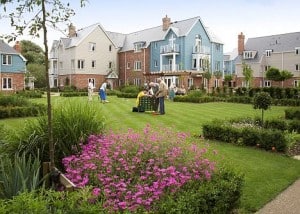 The importance of outdoor space in promoting improved health and happiness has long been recognised, and research has shown a positive relationship between green space and general well-being. It is also further understood that the benefits of urban green space extend to social inclusion and sustainability solutions within a local community.

Interestingly in 2011, the first ever full assessment of the UK’s natural assets quantified UK green spaces to be worth at least £30bn a year in health and welfare benefits. Further detail shows that broken down, the benefits of living with green space are quantified to be worth up to £300 per person per year. This is partly due to the provision of areas for people to exercise, but also because scientific research has found that a view of nature alone can lift people’s spirits.

The various health, social and financial benefits of access to green and outdoor space are particularly emphasised when regarding play space for children and young people. The advantages of children having the opportunity to play in natural environments include the development of social skills, language and comprehension, physical activity, improved physical and mental health and environmental learning. Credibility to the importance of these benefits is reflected through play space being recognised in public policy and legislation.

On an International level, Article 31 (Leisure, play and culture) of the United Nations Convention on the Rights of the Child states that all “children have the right to relax and play, and to join in a wide range of cultural, artistic and other recreational activities”. 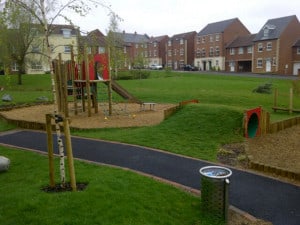 Taking this on at this at a National level, the National Planning Policy Framework (NPPF) places  importance of protecting healthy communities by prohibiting building on open space, sports & recreational buildings & land, including playing fields, without sufficient provision for a better replacement in terms of quantity and quality.

The NPPF then influences planning policy at Local level, which contributes to development of the communities in which we live. Local Plans and supporting documents set out requirements that developments must adhere to in regards to children’s access to play space. An example is the London Plan, where Policy 3.6 (Children & Young People’s Play and Informal Recreation Facilities) states that development proposals should make provision for play and informal recreational space based on the predicted child population of said development. This policy is supported by the stand-alone Supplementary Planning Guidance (SPG) Shaping Neighbourhoods: Play and Informal Recreation, which promotes developments that support, amongst other things, the presence of children and young people in the built environment and public realm, and encourages innovative approaches to play provision.

However, despite the increasing evidence to support the rewards brought about by urban green space & children’s play space, many developments are still not incorporating outdoor space into design as efficiently as they should, which is particularly detrimental for children.

In his article ‘The Child Inside’ George Monbiot, an environmental & political writer & activist, argues that housing developments are not just lacking in their efforts to cater for young people’s outdoor needs, but they are physically designing children out with an absence of play friendly outside space.

The article discusses the design of housing estates that have supposedly been built specifically for families. It highlights how outdoor space has been prioritised for cars rather than children, and that the small portions of greenery that are included in developments are predominantly confined to roundabouts or small gardens. 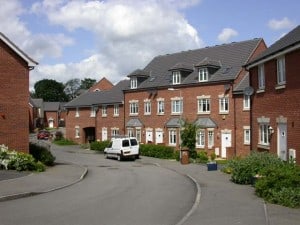 Housing estates are prioritising paved space to allow for parking…

With evidence to support the importance of well-designed outside space ever increasing, it is my opinion that developers cannot afford to disregard its significance. Inclusion of good quality public realm, and children’s play space should be considered as a priority from the very beginning of the design process. Further to this, the anticipated health, well-being and social value of the urban green space needs to be evaluated for the benefit of the development and its future occupants.

The advantages brought to the development, and the wider community as a result of outdoor space can be assessed through the use of in-depth social studies such as socio economic assessments.

Socio-economic assessments cover a wide range of impacts brought forward by a development including effects on population, child yield, local economy, health and well-being, and the provision of public services to name just a few. The reports can stand-alone or form part of a wider EIA to support a planning submission.

In a developing world where the need for multifunctional space is ever increasing, the inclusion of intelligent, useful and fun spaces is a must. Not only for the purpose of creating desirable places in which people can live healthy & happy lives, but also to be granted the planning approval for these places in the first place.

The trend of prioritising space for cars over places for people needs to become a thing of the past.

Going forward, urban regeneration needs to switch its focus to prioritise green space, and exclude the concrete rabbit hutch, bland housing estates we have regrettably grown to accept as the norm. 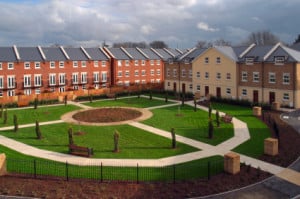 You might also like
One of the following
The Future of Sustainability
Social Value
Green Infrastructure
The Circular Economy
Greengage appointed by BBP to deliver REEB 2022
Launch of the Natural Capital Team
COP15
Login to Greengage Environmental
Reset Password
Enter the username or e-mail you used in your profile. A password reset link will be sent to you by email.