The National Australian Built Environment Rating System (NABERS) over the last two decades has transformed the energy performance of the real estate sector in Australia. It has provided a benchmarking and rating tool that allows property owners to measure, rate and verify the energy performance of buildings and improve it over time to achieve their sustainability goals.  In November 2020, the Better Buildings Partnership (BBP) in collaboration with NABERS launched NABERS UK, an operational energy performance rating scheme for offices. The scheme is currently managed by the Building Research Establishment (BRE). Since its launch the traction for NABERS has been building and it is increasingly being recognised as one of the key pieces to the Net Zero puzzle and here is why! 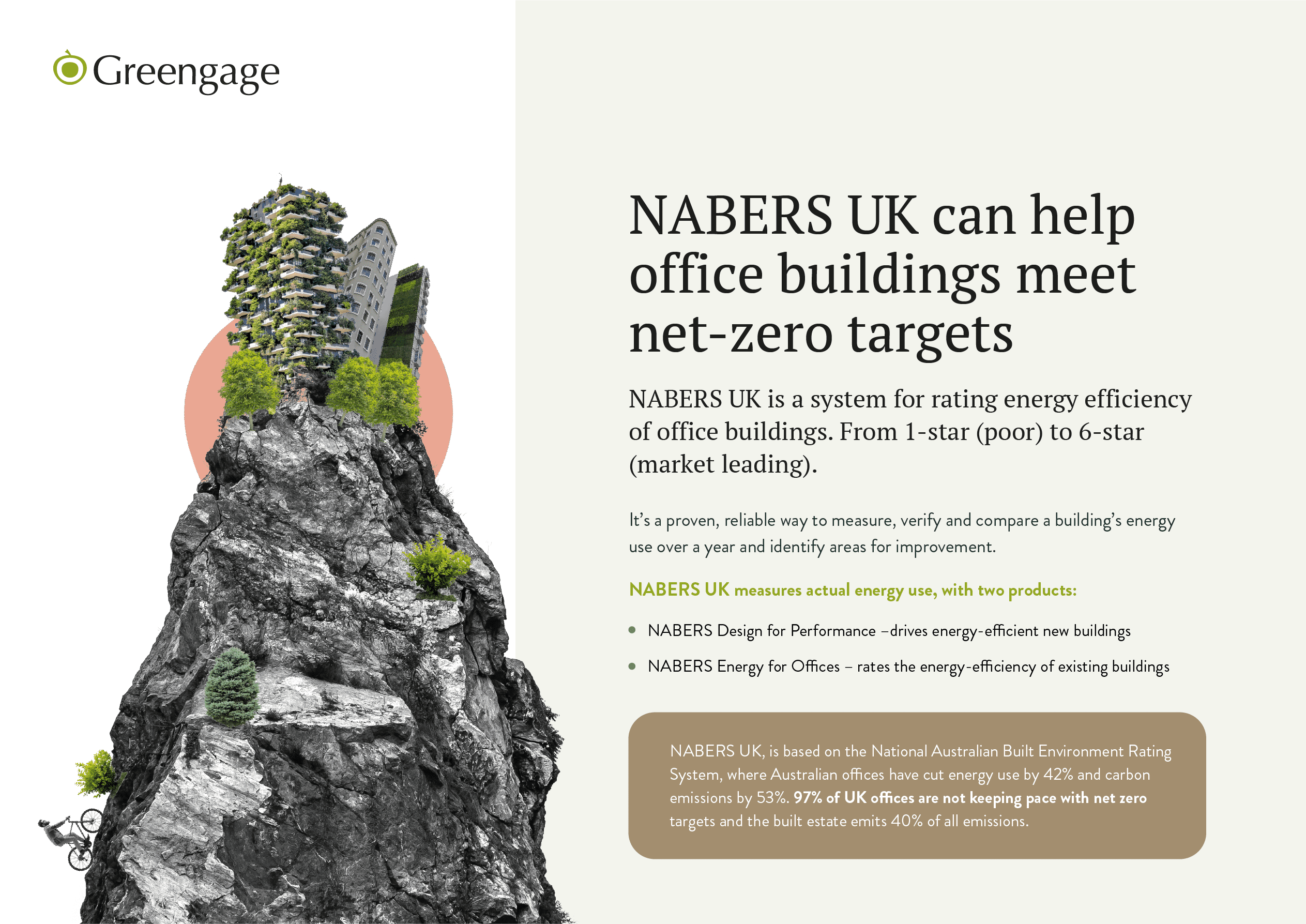 Reducing energy consumption will be critical to the property sector’s transition to Net Zero and to ensure that the residual energy demand can be met by a low carbon grid at the finish line. The UKGBC’s Whole Life Carbon Roadmap illustrates that the UK Built Environment is currently responsible for (i.e., has direct control over) 25% of total UK Green House Gas emissions. If transport emissions are included within scope of the built environment, this escalates to 42% [1]. While new buildings in the UK are significantly more energy efficient, it is worth noting that 80% of the buildings from 2050 have already been built, so a major priority for us is to drastically cut down emissions of the existing building stock and ensure that new buildings designed to be low carbon are operating at those levels in practice.

In terms of the New Buildings, the key challenge to Net-Zero is the performance gap, which is well documented by the likes of Royal Institute of British Architects (RIBA), Chartered Institute of Building Service Engineers (CIBSE) and Building Service Research and Information Association (BSRIA) amongst others. We know for instance that for new buildings the actual energy consumption can be up to 2.5-3 times higher than predicted at design stage. The Design for Compliance culture of designing and constructing buildings plays a significant role in this performance gap, where the focus is on the predicted performance of the buildings, instead of aligning the design and operational energy performance. This results in a disconnect between the regulatory framework and the actual energy use in the building resulting in the performance gap.

For existing buildings, one of the consistent drivers for energy performance improvements so far, has been the Minimum Energy Efficiency Standards (MEES) which is based on Energy Performance Certificates. But it is well established now that there is no correlation between EPCs and the operational energy performance of buildings. The chart below for offices taken from BBP’s Real Estate Environmental Benchmark: Energy Snapshot demonstrates this and shows how properties with better EPC ratings can perform worse that those with lower ratings. Even when looking at the average energy use intensities (medians) across an EPC band there is no consistent improvement moving from G to A.

Within the Commercial Real Estate sector, offices is one of the better understood asset class in terms of energy performance and Net Zero Carbon Targets (see UKGBC’s energy performance targets for offices and LETI’s work on Net Zero operational carbon). In a study carried out by the Better Buildings Partnership in 2020, on over 700 commercial office buildings in the UK, it was found that 97% of the Offices fell short of the UKGBC 2035 – 2050 target and 68% fall short of the 2020-25 target [2]. So, the challenge in terms of reducing operational carbon is quite significant.

NABERS provides a simple, reliable energy performance rating for offices that helps to accurately measure, understand, and communicate the environmental performance of the building while identifying areas for cost savings and future improvements. The NABERS UK scheme has two products:

The NABERS rating has got a lot going in its favour and here are just a few to list:

In the end, having a building that has a lower environmental impact, lower running costs, coupled with the ability to communicate it simply with confidence gives building owners a competitive advantage with prospective buyers and tenants.

And if you aren’t convinced yet, then here are some further statistics from across the pond.

NABERS Energy has transformed the management and energy performance of commercial buildings in Australia. Over the last 14 years, Australian office rated using NABERS Energy have benefitted from an average energy saving of 42% and have reduced greenhouse gas emissions intensity by 53%. This is one of the fastest transformations of energy performance of buildings noted anywhere in the world [3]. 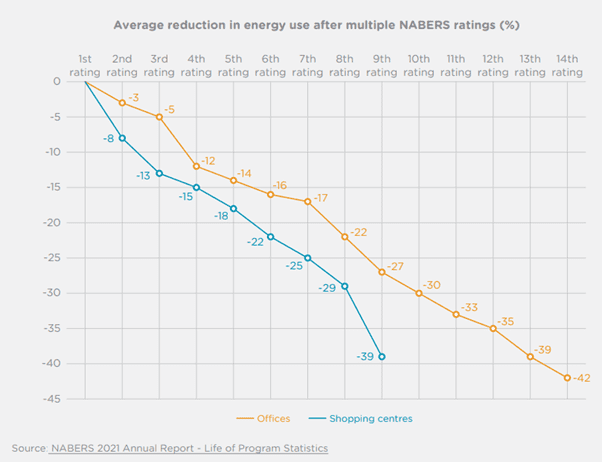 Better NABERS ratings has meant lower voids, longer retention periods and asset value premiums in Australia, especially in the case of Base Building ratings. Buildings with higher NABERS ratings on an average have a 20% longer lease than their peers. That is not all, research has shown that buildings with higher ratings in Australia saw up to 25% increase in their asset price [4].  And this is where you can truly see energy performance turning into actual financial performance, where the promise of rent premium has provided a greater access to funding. This has in turn funded improvements and upgrades to the existing building stock and injected investment into upskilling the supply chain.

The Net Zero transition needs a way by which to measure, verify and rate the energy performance of a building. This is fundamental to understanding if assets, portfolios and the real estate sector is on the right path to achieving energy reductions necessary to reach net zero in operation.  NABERS presents a unique approach to materialise this. While this rating system currently is limited to offices within the UK, those familiar with the Australian rating scheme will know that the methodology and rating exists for a number of additional asset classes.

To deliver true transformation, NABERS will need to be rolled out at scale. We are already beginning to see the market adopting NABERS. The implementation of NABERS was being led by the DfP Pioneers, but this is now extending to a number of other property owners and investment management firms utilising NABERS to improve the energy performance of their portfolio (see the BRE’s list of projects pioneering Design for Performance). A number of the BBP Climate Change Commitment signatories have mentioned NABERS in their Net Zero Strategy. Furthermore, a number of industry publications from LETI, UKGBC, BCO, CIBSE, RIBA and BSRIA all reference NABERS as best practice and a route to reducing operational energy consumption. NABERS is also being increasingly referenced in local government strategies. The use of NABERS is suggested and encouraged as the industry best practice to demonstrate energy efficiency in office buildings within Manchester’s Roadmap to Net Zero Carbon – Report.pdf (manchesterclimate.com) and the City of London’s Whole Lifecycle Carbon Optioneering note.

We are at a point where there is an urgent need for consistency and clarity on the Government’s approach to driving improvements in operational performance. If the government was to announce one as suggested in their consultation back in 2020, then allowing NABERS to be one of the routes for compliance would enable a shift to a performance-in-use culture within the industry, where new building designs could be tied into operational energy performance, and the operational ratings could be tied back into upgrades and improvements in building management creating a loop of continuous improvement. Additionally, rolling out NABERS at scale would allow big organisations to exercise their procurement power, influence and steer the market towards improved energy performance.  As an example, after NABERS was mandated in Australia in 2010, office buildings reduce their energy consumption on average by 35% within 9 years [5].

However, any big transformation comes with its challenges. One of the questions we get asked most often by clients is to do with the reputational risk and leasing value associated with properties with low ratings. When looking at NABERS at a portfolio or fund level, it is to be expected that buildings will fall within a range of low to high ratings, but the important point to note is that NABERS is different from other operational ratings, in that it is geared towards driving continuous improvement.  A low rating isn’t all bad, it means that properties have a bigger opportunity to save and to develop an improvement plan that they can clearly communicate to stakeholders. Maintaining high ratings within NABERS are no mean feat and will need property owners, managers and occupiers to work closely together.  It is natural to want high ratings – nobody wants to be average and that is the real impediment. But NABERS is not about a badge at a point in time, it is about rating to improve performance over time – keeping an eye on the end goal; it is about a shift in culture and radical collaboration and in the end that is what will get us to Net Zero.

How can we help?

Amrita Dasgupta Shekhar leads the NABERS team at Greengage. She previously project managed the development of the NABERS Whole Building and Tenancy methodology on behalf of the BBP. She is able to advice clients on the processes, requirements and key considerations for implementing NABERS.

Richard Hillyard is a NABERS Energy for Offices assessor and leads on the assessments of the operational performance of existing buildings.

Greengage are supporting companies to deliver NABERS. If you would like to speak to us about understanding how NABERS can be applied to your portfolio please contact amrita.dasgupta@greengage-env.com.

You might also like
One of the following
The Future of Sustainability
Social Value
Green Infrastructure
The Circular Economy
Seeking Seasonal Ecologists
What are the Sustainability Benefits of using Cross Laminated Timber in Construction?
Net Zero: the scope 3 dilemma