As part of Green Sky Thinking Week 2015 and under the Theme ‘Social Sustainability’, Greengage hosted an event entitled ‘The Social & Business Return on Investment for Developments’.

The event was well-attended by industry peers from a variety of backgrounds and stimulated good debate both before and after the presentation.

The first speaker, Lesley Treacy, Associate Partner at Greengage gave a high level introduction to Social Return on Investment (SROI), explaining how SROI analysis can help a company establish the Social Value of their business activities using financial metrics.  Lesley explained that a key driver of SROI analysis is the Public Services (Social Value) Act 2012, which requires the Third and Public Sectors to consider their social impact in procurement and commissioning services.  Increasingly, public sector bodies will expect their partners to evidence the value that they create.  Further drivers include mandatory reporting requirements, such as Companies Act (2006) and voluntary schemes such as Global Real Estate Sustainability Benchmark, both of which are causing a stepped change in the way organisations are reporting on their activities.

Anna Devlet, Head of Community at British Land, using Regent’s Place as a case study, discussed the SROI analysis which demonstrated how the financial investments in the community reaped rewards.  Anna explained how the area, once considered the West End fringe, has doubled its size in the last ten years and is now home to 15,000 workers and residents.  British Land can proudly state that the local area is within the top 1% of all of London for reductions in deprivation.  The organisation are applying their key learnings from Regent’s Place to other projects and have used it as the foundation for their Community and Supply Chain Charters. 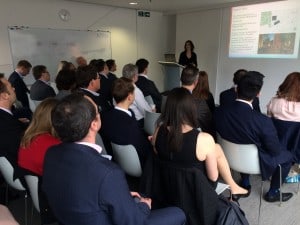 The final speaker, Festus Moffat, Director at John Roberson Architects, presented on the ability of public realm to add economic, social and environmental value.  Quality public realm can result in higher rent and capital values, market attractiveness, and often small improvements can result in major benefits.  However, Festus did raise the disquieting point that while public realm improvements in commercial areas might boost overall business activity, it may also result in displacement of existing businesses and residents.  It is therefore necessary that further empirical research, such as SROI analysis, is carried out on the economic impact of public realm improvements. 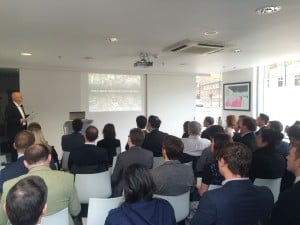 A good level of discussion after the presentations demonstrated the attendee interest in the topic and indicates that as awareness around Social Value continues to grow, so will the importance of being able to demonstrate it in a robust manner.  The benefits to organisations and public sector alike are obvious and we are likely to hear more on the topic of SROI as companies attempt to quantify their impacts through the use of financially orientated metrics in order to make informed decisions on their CSR programmes and wider business activities.

If you have any queries on SROI analysis, please contact Lesley Treacy – Lesley.treacy@greengage-env.com.

You might also like
One of the following
GRESB 2016 Advice
Greengage Insight Series – Social Impacts
Designing for Health and Wellbeing: Practical Experiences – Green Sky Thinking Week Event
Login to Greengage Environmental
Reset Password
Enter the username or e-mail you used in your profile. A password reset link will be sent to you by email.