This week sees the kick-off of the biggest single-event sporting competition in the world, the FIFA World Cup 2014. Football fan or not, there is no avoiding the pandemonium that comes with such an event and it is likely to dominate our TV screens and news feeds over the coming month.

With 32 teams from all over the world heading to Brazil to take part, there is no denying the competition’s large scale impact on the environment, and it’s potential to act as a global platform to raise awareness on environmental issues.

The 2006 FIFA World Cup in Germany was the first tournament in which environmental targets were set and monitored, and this year FIFA and the Local Organisation Committee (the LOC) have built on this and taken measures towards ensuring they deliver a sustainable event and legacy for people to enjoy the world over.

When the announcement was made that Brazil would be hosting the tournament for 2014, FIFA and the LOC set to work to put a sustainability strategy in place.

The Sustainability Strategy compromises of many different elements, the core ones being;

Green buildings: Many stadiums in Brazil were set to achieve LEED certification for green buildings with The Castelao being the first to do so in January 2014. In addition, FIFA and the LOC have organised certified training courses on sustainable management for stadium managers.

Waste management: FIFA and the LOC will ensure that waste management in stadiums and other venues throughout the tournament will be dealt with according to the new regulations and will promote recycling in collaboration with local cooperatives. 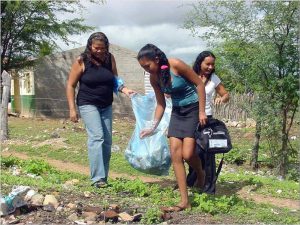 Volunteer training:  FIFA and the LOC have organised additional training modules to supplement the basic volunteer training and help enhance the future employment opportunities of the participants.

Community support: Numerous local organisations in Brazil are tackling social challenges in their communities with the aid of football. FIFA and the LOC have been and will continue to support such organisations with funding and  know-how, through FIFA’s well-established Football for Hope initiative.

Capacity development: Through its Football for Hope initiative, FIFA have organised various forums for community-based organisations in Brazil and abroad to discuss and exchange ideas on the effective use of football as a tool to tackle social challenges.

Climate Change:  FIFA and the LOC have estimated the carbon footprint of the tournament and developed measures to avoid, reduce and offset its emissions.

Reporting: FIFA and the LOC committed to producing a comprehensive sustainability report according to the Sustainability Reporting Guidelines & Event Organisers Sector Supplement developed by the Global Reporting Initiative (GRI).

This strategy aims to mould the organisation and functioning of the event in the planning stages, and throughout the tournament to long after it’s finished. Thus, making this World Cup a stepping stone in the process expected to build the basis for future sustainable World Cups.

Here at Greengage we will be following the World Cup and tweeting sustainability and environmental facts relating to this strategy and the teams playing! Follow us @GreengageEnv to join in the conversation!

You might also like
One of the following
The Future of Sustainability
Social Value
Green Infrastructure
The Circular Economy
Seeking Seasonal Ecologists
Nature based solutions to the climate crisis and financial risk
AND THE WINNER IS…
Login to Greengage Environmental
Reset Password
Enter the username or e-mail you used in your profile. A password reset link will be sent to you by email.