With the General Election approaching the Greengage team will be producing a number of thought pieces on ‘Politics and the Environment’. Here our Senior Consultant Morgan Taylor argues why evidence based environmental policy must be improved…

Anyone watching Newsnight this week may have seen journalist and scientist Dr. Ben Goldacre speaking about the misuse of Evidence Based Policy (EBP).

Policy that purports to be ‘EBP’ has been grossly mismanaged by government past and present. The use of data within policy making is something that is taken for granted and should be subject to greater scrutiny.

Voter apathy regarding politics’ environmental agenda has improved, meaning Climate Change adaptation policy is a hot topic and a potential vote winner, however, very little policy (or legislation) is directly shaped by empirical data, particularly under the current coalition (see anything suggested by former Environment Secretary and Climate Change denier Owen Paterson). Rather, it is constructed from the potentially ill-informed vote winning zeitgeist, which sometimes resembles, but may not necessarily reflect, real world data. Broad brush EBP has undeniably pushed the environmental agenda forward including a commitment for a 80% reduction in greenhouse gas emissions by 2050, but, at a finer detail, the fidelity of research influence over policy is lost.

The cherry picking of data (where data are deliberately chosen and presented out of context) has been widely publicised and condemned as a major issue of the pharmaceuticals industry (see the Tamiflu debacle) although it seems that the misuse and clever manipulation of data in general by politicians is ingrained within contemporary political rhetoric. This is surely worrying when contemporary policy is being shaped to prevent disaster (I think I justifiably use that word avoiding hyperbole) as a consequence of climate change; you’d hope that data is given precedent, when by many accounts it is not. 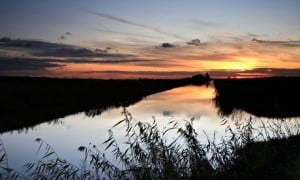 Is the sun setting or rising on the environmental agenda in parliament? Photo from The Guardian.

Whilst research groups and think tanks such as the Committee on Climate Change and the Natural Capital Committee contribute valuable data, and the government have an abundance of guidance documents stating their approach to EBP, it sometimes seems like window dressing; there’s a load of data out there but how much actually filters down and directly informs decisions designed to make our lives better? Data simply isn’t given enough credence in UK politics, particularly if it contradicts the ‘party line’. This would never be the case within other facets of modern life where big data are intrinsic and are generally employed to great effect. This includes medicine (ignoring the problem with Big Pharma as mentioned above), where detailed scientific randomised trials are required to prove efficacy before a technique or treatment can be rolled out; the stakes are just as high in the actions governed by environmental policy but this scientific approach is generally ignored. Environmental EBP does exist but there are problems: Biodiversity Offsetting is one example of the current coalition testing EBP through (their flawed attempt at) scientific trials, but notably falling short; the government’s stalled commitments to designating Marine Protected Zones that have proven economic and environmental benefits is another.

As a caveat, my argument in this piece does not consider the business case for policy implementation, however it has to be presumed that the hypothetical future policy I refer to is economically viable (be that in the short or long term) or otherwise critical (its hypothetical efficacy would otherwise not be proven under the hypothetical scientific analysis), meaning from a commercial perspective (rather than an altruistic ‘save the world’ perspective) it is also in our favour to implement EBP.

Despite all of this, I think policy is moving in a very good direction and I don’t disagree with many trends (particularly in London with regards to sustainable development) BUT we would do well to not lose sight of what should form the absolute basis of all of our actions: scientific evidence.