Developments seeking to reduce carbon dioxide emissions often allow for the installation of a Combined Heat & Power (CHP) engine. However, two recent decisions (one technical, the other policy based) could signal an end to the use of CHP and re-examination of existing/proposed schemes.

CHP engines enable the generation of heat and electricity for use or export within buildings. The use of heat produced as a by-product of electricity generation reduces overall net environmental impact, as described in Figure 1. 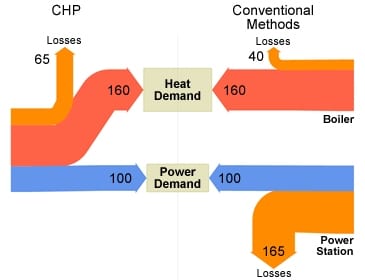 The use of CHP has been supported through adopted policies at a national and regional level. Though not a renewable energy source, CHP is termed a low or zero carbon technology (LCZ/LZCT) in recognition of its ability to reduce net CO2 emissions while still being responsible for some. At a national level, the use of CHP affords benefits to Building Regulations calculations, and at a regional level, most local planning policy documents encourage or mandate the use of CHP in buildings/developments of appropriate scale.

The technical reason that CHP may soon be obsolete is that the UK is rapidly decarbonising its electricity supply as more wind power generation projects come on-line and obsolete coal-fired power stations are decommissioned. For development there will be a knock-on effect on the carbon emission factors that are applied to the use of electricity within Building Regulations through their revision in future updates. And where this is critical is in the use of CHP when assessment is made of a comparative system providing heat and power to a development: i.e. grid supplied electricity and high-efficiency gas-fired boilers. Figure 2 shows the sensitivity of carbon emissions factors for electricity and the comparative performance of CHP versus other technologies. 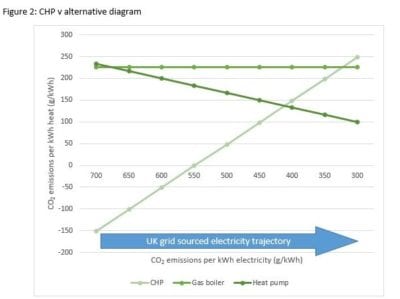 The future trajectory of the UK energy supply suggests the trigger point for CHP no longer being used within development is likely to occur within the next 15 years – given the country’s commitment to achieve a 57% reduction (from 1990 emissions) by 2032. In this context we can see that development policies, such as London Plan policy 5.6, and guidance, such as the GLA’s Energy Planning document, will require revision to give flexibility to developments which choose not to incorporate CHP and pursue an alternative, lower carbon path.

The policy-based reason that CHP may soon become rare in development projects is the recent publication of think tank Policy Exchange’s report: Up in the air – how to solve London’s air quality crisis. The report outlines how an estimated 328,000 school children and 3.8 million workers in London are exposed daily to unhealthy levels of Nitrogen Dioxide which are linked to asthma and respiratory infections. It goes on to demand that the London Plan policy, and London’s Climate Change and Energy Strategy in general, is rethought ‘to reconcile the potential conflict between decentralised energy and air pollution’.

The implication of lobbying by Policy Exchange in this way, could be that increased localised emissions (be they oxides of carbon, nitrogen or sulphur or particulate matter) from CHP is controlled by policy or avoided altogether by scaling down the support for CHP within the London Plan.

What this means for development proposals is two-fold:

For emissions to improve will require the selection of an alternative technology/technologies or different design approach. As the cost-benefit of CHP will not be available to schemes with this approach it will mean higher capital and operational budgets for the development. For schemes sticking with CHP, the treatment of flue gases will be required with corresponding physical plant space and maintenance budget. The question for these developments will also be what do they do in 15 years’ time? The CHP engine would be at the end of its technical lifespan and its replacement a similar machine is much less straightforward than property managers may think.