We are only just a few months into BREEAM 2014 as the ‘current’ BREEAM methodology, but already it is a proving to be a significant departure from its predecessors, so we want to look at the impact of some of the key changes in practice and whether these make BREEAM 2014 is better, worse or about the same.

End of green leases
One of the most significant changes in BREEAM 2014 NC sees the introduction of a revised approach to assessing shell and core developments, designed to offer greater flexibility in achieving certification. Under the new methodology, the assessment of new construction commercial developments (Office, Retail, Industrial) will now be considered under one of three pre-defined project types; Fully fitted, Shell & Core or Shell Only (‘shell development’). For shell developments, this will ensure that building performance and compliance with BREEAM is assessed only against a pre-defined criteria set, tailored towards sustainability issues and features that are achievable and appropriate to the particular stages of development. 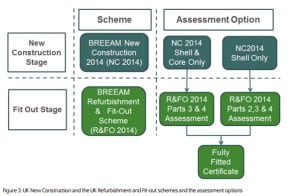 The principal intention of new approach being to minimise the level of landlord-tenant collaboration required on fit-out specification for shell developments, and thus eliminate the necessity for green lease agreements. This is in recognition of real world experience, which shows that higher BREEAM ratings are not always sought (or achieved) by shell developments, typically in cases where a developer is unable to place or commit to place a binding green lease agreement on future tenants/owners, and where the building has not been let or sold at the time of post construction assessment. 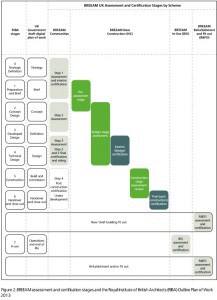 At the same time, the BRE are introducing a new scheme for non-domestic refurbishment and fit-out that will work directly alongside the BREEAM 2014 NC approach to shell developments. In a similar way to BREEAM 2014 NC, the scheme will provide a criteria set tailored to the stage of development. This will allow the first fit-out of shell and core or shell only projects to gain ‘Fully fitted’ certification under the New Construction 2014 scheme. A draft version of the BREEAM UK Refurbishment and Fit-out scheme has been published for consultation (July 2014), with final release scheduled for October 2014.

So what are the pros and cons of the changes? Here are a selection of our thoughts at Greengage on the matter.

A tailored criteria set will provide a better reflection of shell and core performance, by considering only sustainability issues truly within a developer’s control and influence.

• A more ‘simplified’ approach should make it easier for developers, design teams, planning authorities and alike to better engage and apply BREEAM.

• No more green leases! For tenants/occupiers who are ahead of the curve, the new approach provides the opportunity to show off their commitment to sustainability in fit-out.

• A levelling of the playing field between ‘larger’ and ‘smaller’ shell and core developments, where previously the application of green lease to smaller scheme may have been a significant commercial hurdle.

• A ‘one size fits all’ approach can conversely provide a poor reflection of sustainability performance, when the scope of a shell and core development extends beyond the pre-defined tailored criteria set.

• No more green leases! The lack of ‘push’ from a green lease, may allow those behind the sustainability curve to continue business as usual.

• The end of ‘Fully fitted’ certifications? Without robust application and monitoring of post completion planning conditions, commercial shell and core buildings may become occupied without due regard to sustainability of the fit-out.

• Are all BREEAM certifications created equal? The proliferation of variations in BREEAM project types and schemes may become a source of confusion. Will the casual user appreciate the nuances of a BREEAM ‘Shell only’ or ‘Fully-fitted’ and sustainability features inherent within each?

The Curve of Influence
Graph 1.0 shows a comparison of the RIBA Stage at which Credits should begin during a development between the Offices/Bespoke 2008, NC 2011 and NC 2014 schemes. 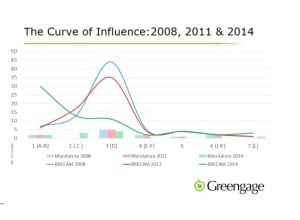 The 2008 & 2011 schemes show a similar trend with the majority of credits encouraged to begin around RIBA Stage 3 (D), the middle of the design process.
The 2014 scheme shows a steadier timeline with the credits peak being right at the beginning of the development. This demonstrates that the BRE expect engagement with these credits right from the start of the project along with the business case, strategic brief and other core project requirements.

Not all Ene 01’s are created equal

Past versions of BREEAM have used an innovative means to target energy and emissions reductions from buildings and this will continue in BREEAM 2014. While less credit is given for similar building performance, a key change is the further devolution of Building Regulations and de-facto local standards being required of new buildings.
BREEAM Credit Ene01 uses a BRE generated calculator to award credits based on three metrics that are calculated as part of the National Calculation Method (NCM, which is required of all new buildings and forms the basis of the EPC calculation). The three metrics are:

In conceptual terms these tree metrics can also be assessed as:

So the key to score highly is to have a balanced scorecard over the three metrics:

Buildings that score lowly in one category can still achieve a number of credits within BREEAM however it is unlikely that scoring poorly in two sections will see any significant number of credits being achieved or the minimum mandatory performance required for an ‘Excellent’ rating.
BREEAM in England, Scotland, Wales and Northern Ireland

The way that BREEAM awards credits in the Ene01 category is to measure the above metrics against the minimum legal standards for the country in which the building is to be situated. Therefore the better the building performs against the standards of the country or region in question, the more BREEAM credits are awarded. In the home nations this throws up some major discrepancies of BREEAM performance for a similar building.

Consider a typical office building constructed to meet Building Regulations 2014 for England. In the English version of BREEAM this scores no Ene01 credits but passes Building Regulations. In Wales this building fails to meet Building Regulations and therefore cannot achieve any Ene01 credits. In Scotland and Northern Ireland the same building achieves 2 credits under Ene01.
Taking this example further it is probable the BREEAM ‘Excellent’ buildings in Wales will have higher energy standards than English ‘Excellent’ buildings, who in turn, will have higher energy standards than Scottish or Northern Irish buildings.

For developers with portfolios across the UK this will present a problem of a shifting specification to meet a similar corporate BREEAM target and will further call into question the wisdom of devolving Building Regulations, especially when targets converge towards zero carbon buildings possibly mandated by an EU directive.